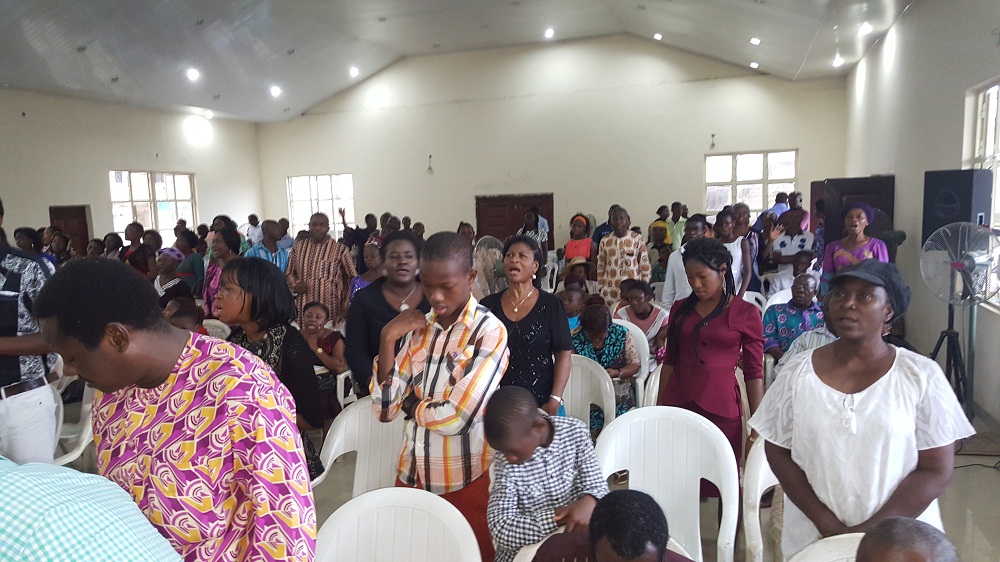 On May 5th bro. David Walter and I flew to Lagos, Nigeria. Words cannot adequately describe what God did on this trip. We went there not knowing what would transpire, but hoping to just be a blessing to a few brethren in Lagos and in Port Harcourt. But God had bigger plans, and it was not of our doing. We had a part, and provided some ministry; but there were so many other things that God did between the brethren and to many individually apart from us. We were mere participants.

We were not aware of the challenges that they had been facing on many levels in recent months. Spiritual issues, natural issues, illnesses; just attacks from the enemy to weary the saints of God. But God met us.

There were meetings the first weekend in Lagos and the second weekend in Port Harcourt. Brethren had been asking us to come for a long time, and now we felt a release from God to go. It was His perfect timing. In both instances brethren came from many fellowships to attend. It was a divine appointment. Praise God.

In Lagos for the weekend meetings, six fellowships joined together to attend. It was a full house. The praise and worship was wonderful. Either David or I ministered in each service, and the response was wonderful.

(We had found out just on Saturday that the brethren in Lagos assembled an all-night prayer vigil, 10 PM to 6 AM on the night before meetings started, Friday evening. What dedication and determination to breakthrough with the Lord!)

On Saturday David ministered on sickness and disease. We had brethren come up for prayer, and we were able to lay hands on and pray for over 70 people, many with serious life-threatening illnesses. We believe God touched them, and we will see the full deliverance in many.

On Sunday morning I shared some of my testimony of how God brought to me this word on the Kingdom.

Praise God. We hope to provide some of their own testimonies so you can hear firsthand.

Since we were still in Lagos till Thursday, the brethren continued to put together meetings every night we were in town, Mon. thru Wed. On Monday evening, traffic was horrendous as it took some of the brethren 4 hours to get to the meeting. And yet the brethren were determined to meet. (Again, their dedication is something I don’t believe the Lord looks lightly upon.)

On Thursday May 12th we flew to Port Harcourt with bro. Alade. We had meetings Thursday and Friday evening, two meetings on Saturday and one on Sunday morning. On Saturday and Sunday the meetings were attended by over seven fellowships, as brethren came in from Abuja, Owerri, Calibar, Uyo, Ikpae, Benin City some other scattered cities, plus three other fellowships from Port Harcourt were present.

God was doing something marvelous and sovereign. There was such a unity in the Spirit that some said they had not felt for 30 years. The flow and liberty in the Spirit was unprecedented. God was further joining us to them, and them to each other. Praise God!

We believe the plans of the enemy were spoiled.

In Port Harcourt I was able to bring a short history of the Church and the moves of God in the past, including Azusa Street and the Latter Rain Movement that began in 1948. David and I explained however, that as good as these were, we are not looking for another visitation, but apermanent habitation. We are not contending for something that will one day wane, but an indwelling and a transformation that will abide. Praise God. We encouraged them we are on a precipice of crossing over; that we are about ready to go over into the Promised Land; no longer to return to the wilderness.

The worship and praise was so powerful in Port Harcourt. At first I was so amazed and thought this was how it was there every week, but many said that we were experiencing something new, something greater, something more than they had experienced in many years. God really brought a refreshing to them. As I said, God moved sovereignly and used this time to bring again such a unity and flow in the Spirit. Praise God. All I can say is that it was a divine appointment. We were blessed just to be a part of it.

On Saturday evening, David shared on “a lamb for every household” and at the end of the evening, when asked who would be willing to stand on behalf of their families as a sacrificial lamb, practically every person stood to their feet in solemn dedication and commitment to the Lord. The worship that followed, was beyond anything words could describe.

I was also blessed to hear the testimonies from so many of how they were impacted and thankful for my Dad’s books, and how it was the right word at the right time. (Timing in God is everything). Back in 1990 when Dad went, many of them were caught in Pentecost or the church system, and his writings provided something more, answers and a way of escape. Then the ministry of bro. duCille came to bring the message of the Kingdom which gave them direction and support. So many recognize him as the father of this work in Nigeria. They continue to look at us and Sonlight Ministries as a part of them, which we are. Praise God. We plan to stay in better communication with them and hope God will allow many of us to go there in the future.

Being there is so intense. There’s the natural and physical challenges with the heat, humidity, pollution, noise, traffic congestion, living conditions, hard beds and just being in an unfamiliar location; all of these coming at you at the same time. That alone is very challenging. But on top of all that, you deal with the spiritual warfare, witchcraft, religious spirits, familiar and ancestral spirits. Just to survive is an overcoming challenge. But out of the midst of that social and spiritual conglomeration come the most precious brethren. They are gold. Their passion for the Lord is so encouraging. They so appreciate and respond to the ministry of the word of God; and they let you know. There’s a hunger for God, and for this word of the KINGDOM.

Even with the general people there is such a receptivity to the gospel. There are churches everywhere. There’s has not been the erosion of Christianity in public life like in America. It’s very interesting. I heard Christian music playing in the airport and other public places. There seems to be outer court Christianity everywhere. Both evangelicals and Pentecostals are everywhere.

The good thing is that there’s so much Christianity there. The bad thing is that there’s so much Christian religiosity there, coupled with spirit activity. This dichotomy adds to the mix of it all. There is more work there for the Lord than a few of us could ever fill. We must pray that God raises up many laborers with us that will hear the cry, answer the call, and GO. Praise God.

As difficult as it is I thought about all the Christian missionaries of the last few hundred years that went there and lived there with no air conditioning, or jet planes, or hotels, or electricity. I gained a much greater appreciate for those that have paved the way and evangelized that continent. Now it’s our turn; and not just to bring the gospel of salvation or Pentecost, but we have the high privilege to bring the Gospel of the Kingdom.

We are so very thankful that God got us there, kept us, and brought us home safely without incident. Praise His Holy name.